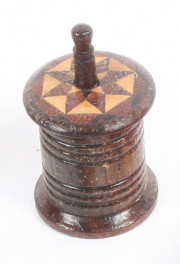 Today we think of a reel for holding cotton to be plastic rather than wood. This being so, for as long as thread has been made, it was essential to wind it onto something to prevent it from becoming tangled. In the simplest form this might be just a square of card with two slits, but inevitably far more elaborate examples were developed. Thread was sold on cards, in skeins and on reels. Reels were often made of bone or wood and usually incorporated the maker's label on a small printed circle to each end. Reels from the 19th century can command prices in excess of £100 sometimes cut through Mauchline normally incorporates the more elaborate fitted sewing boxes came with bone, ivory or mother-of-pearl reel holders that fitted over the wooden reels and presented a uniform set of reels in the box. These sets usually number between six and eight and are now hard to find. The level of decoration can vary with the carved and pierced mother-of-pearl examples, as well as ivory examples most sought after. Silk winders are usually of flat form, shaped as stars or snowflakes and come in a whole variety of materials, the most rare being glass, sometimes through different coloured layers or engraved with elaborate scenes. The variety is almost endless and even the mundane printed card advertising examples are highly sought after in good condition. Other popular examples include those in Tunbridge, Tartan and Maunchline ware. Reel stands are most commonly found in wood, but also in brass and gilt metal. They normally take the form of two or three circular tiers with brass rods vertically arranged to secure the reels, the top sections often incorporate a pincushion and sometimes a thimble stand or other accessory mount on the base.