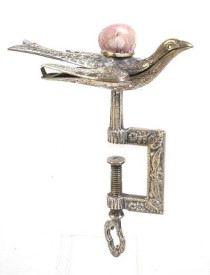 The main purpose of the clamp was to hold one end of a piece of material being worked so that it could be held taut and worked on. For a neat, well-worked hem, a clamp and the resulting tension were essential. As with other sewing tools, examples range from the charming to the mundane to the most elaborate of forms, covering the whole range of materials. Many clamps were given as love tokens, bearing flaming hearts or doves, or worked with appropriate inscriptions. These were mainly the work of the itinerant craftsman, lovelorn sailor or shepherd. Souvenir examples were also popular both in tunbridge or Maunchline ware with the early Tunbridge examples bearing the familiar label 'A Trifle From...'. Clamps were made in may forms, some incorporating thimble stands, pincushions, needlecases and even tape measures. A more common example was the winding clamp used to unwind cotton or wool from the skeins in which it was supplied. They were often surmounted by a cup on which the wound ball rested and were frequently made in pairs and can occassionally be found fitted into boxes. Another popular clamp was the hemming bird - the spring clip fashioned as a bird and this design was the subject of many American patents. Two types of clamp feature hooks, the first is a simple hook on which to attach a loop for working a piece of netting, the other has a winding handle to allow a series of cards to be wound to form a patterned card.