All the Presidency’s Men 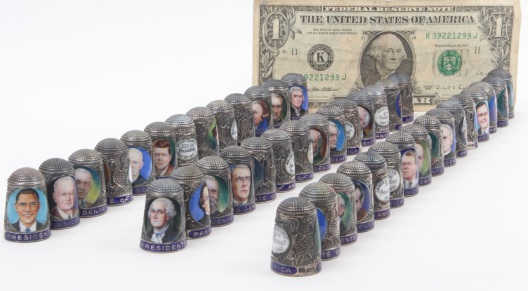 A completely unique collection of handmade silver thimbles decorated with enamelled miniature portraits of every man who has served as President of the United States will be sold in England on 30 November 2016. The collection was made by English maker, Peter Swingler, who honed his craft at James Swann and Sons, the last of the Birmingham thimble makers.  The collection which is expected to sell for more than £2000 or $2500 will only remain complete until the 8 November when or if, with current controversies, a new American President is elected.

The thimbles belonged to British collector Mary Cruwys, who died earlier this year, and it is entirely unique, as she added individual commissions of Ronald Reagan, George Bush Senior, Bill Clinton, George Bush Junior and finally Barack Obama, following his inauguration in 2009. Originally Swingler had produced only three sets of 39 presidents, up to and including the presidency of Jimmy Carter. Each enamel portrait took many hours of work to complete as the thimbles had to be re-fired between each newly applied colour.

Auctioneer Robert Bleasdale says ‘The portraits are very detailed and depict every man who has served as president of the United States from its first, George Washington, to today’s president Barack Obama. Each thimble is decorated with eagles and the name and date of service for each president. We are expecting a lot of interest from the United States, where there is a strong tradition of thimble collecting and Peter Swingler’s work in particular, but we think this unique presidential collection will be of much wider interest in view of the forthcoming election.' 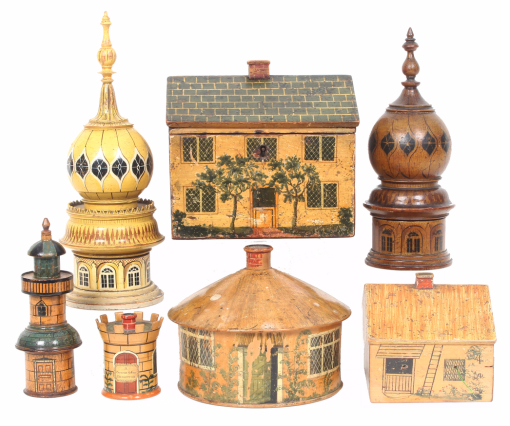 A collection of early Tunbridge Ware architectural boxes were a runaway success at our July Summer Sewing Sale with a rare spice box in the form of a picturesque rotund cottage (pictured centre bottom) making £12,700 (inclusive of buyers premium). A nutmeg grater with a design based on the Brighton Pavillion made £6000 (pictured top right) while another piece of Tunbridge Ware also based on Brighton pavillion made £2400 (pictured top left). In total the lots pictured above made in excess of £27,000.

While the Tunbridge Ware lots were undoubtedly a highlight of the sale for many collectors this July, there was a particularly good range of collections appealing to other interest areas, including some stunning visiting card cases, thimbles and rare knitting sticks and sheaths. The quality and range of lots helped us achieve our best overall sales to date. 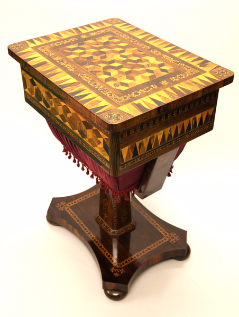 Antiques and auction journalist, Huon Mallalieu from 'Country Life', cherry picked not one but three objects from Bleasdales recent auction, to feature in his first 'Art Market' report for February.

Not surprisingly it was this beautifully crafted sewing table, which sold for £4340, that first caught his eye -Huon describing it as a 'very splendid Rosewood Tunbridge Ware table'. With an eye for the unusual he also picked out a rare adjustable thimble patented by Rosina Margery Durham of New Barnet, which sold for £595 and as a former watercolour specialist he took a liking to a combination sewing and watercolour box dating from the reign of George III .

On a more personal note, Huon Mallalieu, who has had many year's of experiece not just as a specialist but as commentator on the auction market, also pondered the loss of these more specialist sales and with them more affordable decorative objects from the larger auction houses, who now focus entirely on the big money high profile pieces.

If you would like to read the piece in full you can visit the Country Life and download the 3 February issue. 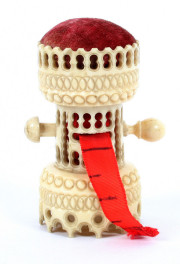 Robert Bleasdale has found time to put pen to paper and look at the history of two indispensible sewing acoutrements - the pin cushion and tape measure. Both articles appeared in Antique Collecting Magazine and are reproduced with their kind permission.

Pins, Politics, Fashion and Self-Defence
An Antique Collecting Article on Pincushions
Robert Bleasdale explores the history and design of the humble pin cushion. (The article is reproduced with the kind permission of Antique Collecting Magazine)
Pincushions.pdf
Adobe Acrobat document [316.8 KB]

The Rule of Thumb an Ell and a Nail .
Robert Bleasdale explores the Development of the tape measure from 8000BC onwards.
Tape Measures.pdf
Adobe Acrobat document [249.8 KB]

Stitching up the Market - 2011 ATG report 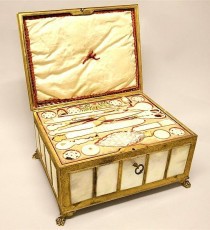 This year we consigned some strong collections, with a broad range of rare and beautiful sewing tools and it was this quality that really shone through on both days with very few unsold lots.

The auction on 29 November saw a tremendous amount of interest in the painted Tunbridge Ware and Brighton themed pieces with a pretty painted whitewood child's sewing box selling for £4,000. A cribbage board depicting a Brighton scene made £600 over a bottom estimate of £300.

The stunning Palais Royal sewing box, pictured, was one of the many highlights of the Sewing Sale on 30 November making £4,600 hammer.

Gathering from the feedback we have had from many of our clients the new online bidding system, organised through the-saleroom.com, was a success with 40% of bids chanelled through their live auction system. 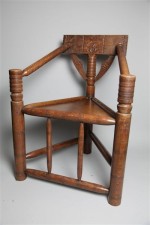 In an extraordinary turn of events the Warwick Chair Exhibition, which opened during our 2011 sale and viewing days was a sell out before it went on view with one collector buying all the exhibition pieces which were for sale.

This selling and loan exhibition had been inspired by the famous triangular, Saxon Warwick chair which was loaned to us with the kind permission of the Master of The Lord Leycester Hospital. The Exhibition included not only this extraordinary piece of English furniture (dating back more than 900 years) but also examined the subsequent handmade reproductions which proved so popular with the Royal family during the 19th and early 20th centuries.

We want to pass on our thanks to all those people who loaned to the exhibition and to those who helped with the detailed catalogue. All the funds raised from the sale of the comprehensive exhibition catalogue benefited the Hospital.﻿﻿

We do have some copies left of our detailed Warwick Chair catalogue. Please get do get in touch if you would like to order a copy. 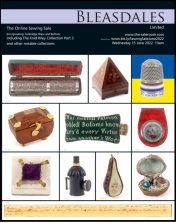